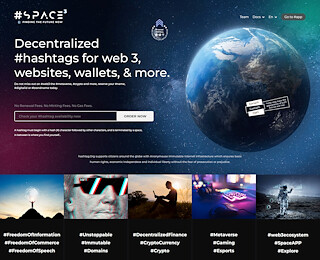 A decentralized autonomous cooperative DAC isÂ a relatively new concept in the world of blockchain technology. Essentially, they are decentralized networks that operate using smart contracts and self-executing code, allowing them to operate autonomously without the need for central authority or intermediaries. These organizations have the potential to revolutionize the way we think about governance, decision-making, and even business models, making them a hot topic in the world of decentralization and freedom of speech movements.

In this article, we'll explore what DACs are and how they work, as well as the benefits they offer and the types of organizations that are using them. We'll also discuss why Hashtag.Org's blockchain name service is an ideal solution for those looking to create and operate a DAC or DAO.

What is a Decentralized Autonomous Cooperative DAC?

What are DACs Used for?

DACs can be used for a wide range of purposes, from decentralized decision-making and governance to decentralized businesses and even decentralized social networks. The key feature of a DAC is that it operates autonomously, using smart contracts to execute actions and make decisions based on predetermined rules and inputs.

There are a number of benefits to using DACs for decentralized decision-making and governance. Some of the most notable benefits include:

Who is using DACs?

Decentralized autonomous cooperatives (DACs) are a revolutionary concept in the world of blockchain technology. These decentralized networks operate using smart contracts and self-executing code, allowing them to operate autonomously without the need for central authority or intermediaries. DACs offer a range of benefits, including decentralized decision-making, increased efficiency, and improved transparency. They are being used by a wide range of organizations, from decentralized businesses and social networks to decentralized governance systems and decision-making platforms.Â